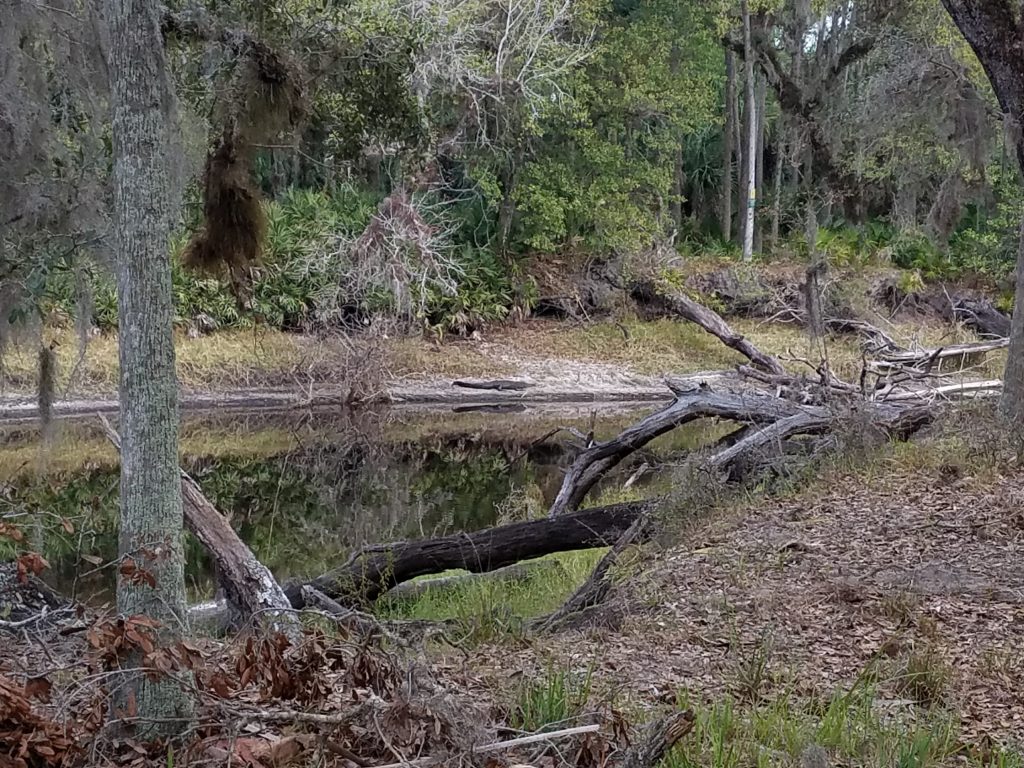 I took Tuesday off to extend my long President’s Day weekend and planned on joining the group that Philippe was hosting on a hike/ paddle to do some shad fishing. Unfortunately that trip was postponed due to the high winds in the forecast. As I could not reschedule my day off to join the group on the new date due to other obligations, I decided to venture back out to the Econ River, fish the pool we had success on the day before, and then make my way further upstream to see if I could find other congregations of fish. The Econ is a good place to fish in high winds, as there is generally good shelter provided from the wind, particularly on low water years where you will be fishing well below the high bank line.

I arrived at the river at the white/ yellow trail split and decided to hug the river on the high bank to watch for current and see if I could spot fish from the high vantage point. I was quiet as I moved and found a lot of alligators that we did not see the day before. On each turn I found at least one alligator, and by end of day, I had seen twelve, including a dragon that was confident enough not to slide in to the water the moment it sensed me. In fact, it was not until I made it nearly directly across the water from it before it slid in, and even then, it left its tail on shore and did not submerge. I decided not to fish that turn! 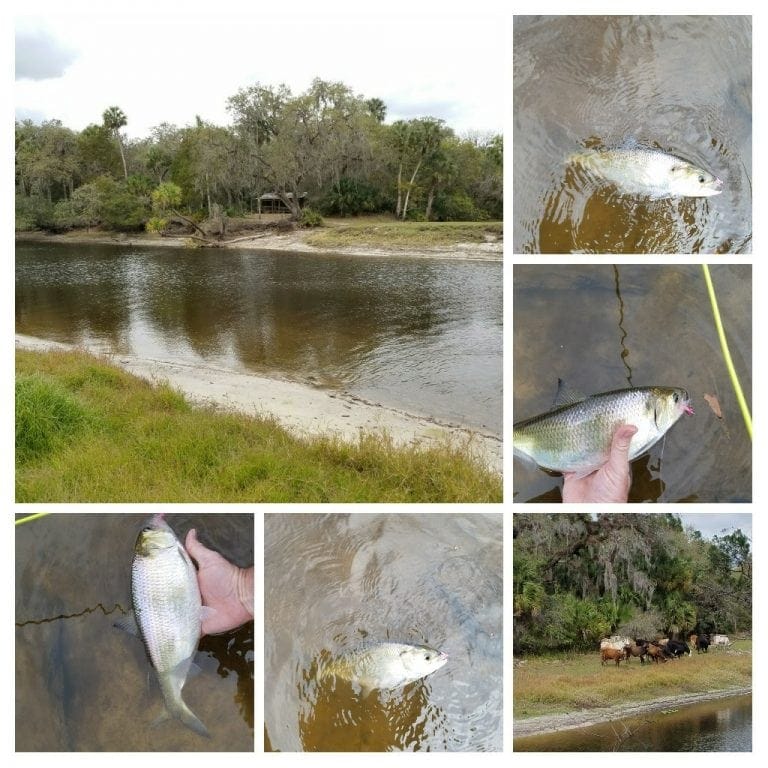 I reached the pool from the day before, and the gator that was there slid in quietly, surfacing every 10-15 minutes, keeping a keen eye on where I was. I gave him plenty of room and wet waded no deeper than knee high. I fished the head of the pool again and did not find fish in the best of the current. Instead, the fish seemed to be hanging in the depth of the relatively still water in the pool just downstream of the current. This meant that I was swinging flies in to the gator zone. I hooked up with two shad, lost one and got one to hand. The alligator made no attempt to come after a hooked fish.

I worked my way downstream through the pool, fishing five steps at a time until I got to its tail where the current picked up. At the tail I caught another shad, and lost two more. I was surprised by the amount of Orinoco sail fin catfish in this stretch of river and just how close they would let you get to them before swimming off. I made several nice presentations to multiple cats, but had no takers. I bet they would be fun on a fly rod though!

I moved up to the next turn and fished the tail of the pool. I caught two more shad and lost another two as I worked back downstream to the head of the first pool. By noon, the front had started to move through and the fish turned off, so I decided to hug the river on the high banks and do some spotting until I reached the Yarborough shelter. There are a few areas of possible interest on the way, including some turns with decent depth and current at their heads and tails. However, the stretch of river approaching the Yarborough shelter is very shallow this year. While this stretch can be good in normal water years, this year I would not waste the time hiking up again. I did not spot any fish, or really see any activity of any sort. I did find that dragon on the one turn of interest that I did want to try, but I played it safe and yielded.

All in all it was a good day, and I was happy just to actually catch fish again. There are fish in the Econ, albeit not very thick. If you are going to venture out, focus on the areas of current, however minimal it seems, accelerating in to, or out of the pools on the turns. Hopefully the rain this week will kick up the discharge of not just the Econ, but the St. Johns River and get some fish moving upstream. I have heard of shad runs in Florida heating up in March. Hopefully this is one of those years.