I have said it before, and I will say it again… December shad fishing, is generally a crap shoot and this year is no different. Todd and I decided to meet up at C.S. Lee around 9:30, but with both of us running late, did not hit the water until after 10:00. Being late actually worked out okay because it allowed the dense fog to melt off, but by the time we were ready, the temperature was already in the mid 70’s. With water temperature around 65 degrees, we both decided we would wet wade, as the expected high was in the low to mid 80’s for the day.

We made our way to the creek mouths just upstream of the SR 46 bridge. With the gauge height around the 5.4 feet mark, we found the wading here to be in the knee to thigh high area. The pasture is still basically under water which we expected would likely mean the bass and panfish would be spread out, and not there for the taking in the river. We spent an hour or so casting the switch rods, swinging flies with the hopes of finding shad. With the high water and decent current, I found the 10 foot T3 Tip matched with a 5/32 hourglass weighted fly was not bumping bottom. I switched tips to a T8 and found I had a nice bouncey presentation. Unfortunately there were no takers so we decided to head on up towards the Econ.

In years prior to my utter and total consumption with fly fishing for shad with a switch rod, I often carried an ultralight spinning outfit with me, mainly to use when the wind picked up to levels that made single hand casting uncomfortable. With a switch rod rigged with a Skagit head, I found myself less put off by wind, so I would generally never pick up the ultralight and it just lived in the hold of my kayak, eventually being demoted to a dusty corner in my garage. Remembering that it once served me well, I decided to include it again, at least in the early part of this season. While I of course much prefer fishing for, and catching shad on the fly, in high water years, a spinning rod adds the option of trolling for fish as you make way from one spot to another. If you find shad while trolling, there are likely more to be caught, so you can find an area to wade near where you hooked up, and hop out and start swinging flies.

I rigged up the ultralight with a tandem rig, a pink and white Roadrunner with silver spoon as the lead lure, and a red and white shad dart trailing behind, and set out on a slow troll with the Hobie on the way up to the Econ. I took my time and zig-zagged up river, covering as much water as I could until I reached the mouth of the Econ. No takers! Not a shad, not a striper/ hybrid, not a bass, not even a humble panfish. Not a good sign!

Todd and I found good current and swung flies near the mouth of the Econ for another hour and a half, thoroughly working the area at different depths using different tips, weights of flies and retrieval methods, and again found no takers. I received a call from Philippe and found that he and John had similar luck launching from Cameron Wight, and working the area near Lake Jessup, with hopes of finding shad hanging where the South wind pushed nutrient rich water from the lake in to the river. Phil had picked up a crappie, but reported slow fishing beyond that.

After a quick sandwich and a frosty beverage, I decided to take the kayak and anchor up in the channel near the east bank. While I much prefer to wade and move around versus fishing from the kayak, when the water is high, an anchor trolly and anchor can be advantageous. I started casting the ultralight and working the area. Around 2:00, a slight south/southwest breeze picked up, creating a subtle ripple on the water, which had been glassy all day. There were large gar rolling all around me, and desperate to get the skunk off me, I made a cast near a swirl a gar had made and began retrieving the tandem rig, with a quick, jerky retrieve and hooked up with a fish. I thought maybe I caught a hybrid bass as it jumped once or twice, but when I got it to the kayak, I found a tiny shad in miniature, a hickory no more than maybe 12 inches. Unfortunately I lost the fish before snapping a picture. I caught the fish in the upper water column, as opposed to the bottom third I had been fishing prior to making the cast to the gar.

I continued fishing the upper water column and quickly caught another fish (pictured here.) Both fish took the lead jig, the pink and white roadrunner. After getting a picture and returning the fish to the water, I moved to the switch rod, switched tips to an intermediate sink, and tied on a beadchain weighted white shad dart. I had not rigged my single hand rod today, expecting to focus on two hand casting, so I began working the area with the fly, making snap- T casts with the two handed rod while seated in the kayak, not ideal, but possible. I tried to emulate the retrieve I was using on the ultralight, with the fly, but did not crack the code. I likely could have caught several more fish using the ultralight, but the allure of catching one on the fly outweighed my desire to catch another on the spinning outfit. The breeze died down, the river became like glass, and everything shut down once again. Eventually I did switch back to the spinning rod and never hooked up with another fish. The breeze seemed to be what turned the fish on.

December shad fishing is difficult, but you can catch them. For me, it required dusting off an old standby, and making some compromise. While I wanted to swing flies, a Roadrunner, worked through the upper part of the water column, while anchored up in the channel is what was required. At the end of the day, a December Shad is a December Shad, and I will take it! 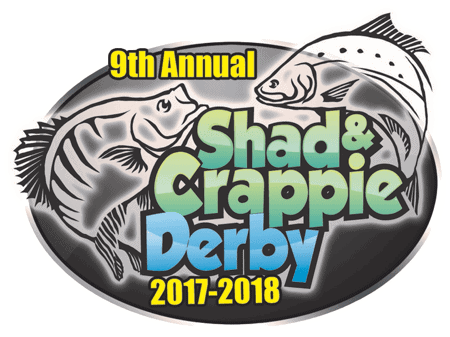 If you fish in Florida, don’t forget to sign up for the 9th Annual Shad and Crappie Derby. This year there are over $7500 in prizes! It looks like the rules and awards have changed, including monthly prizes! Check it out…

Three divisions will be awarded prizes for both Shad and Crappie:

To get the 2017/ 2018 shad fishing season started, I have decided to run a First Shad of the Season Contest! The winner will receive a Flambeau floating foam fly box with thirty shad flies inside tied by yours truly.

Okay, this is easy right? Now we just need the water to drop another 3 feet and we should be in business! All kidding aside, I am starting to really get amped up about this shad season, and I hope a little friendly competition will help us all get out there, start hunting for fish, and come together in fellowship to share our experiences. The Shad on the Fly Facebook Group is a great place to share reports, pictures, videos, and organize some outings together. See you on the water!