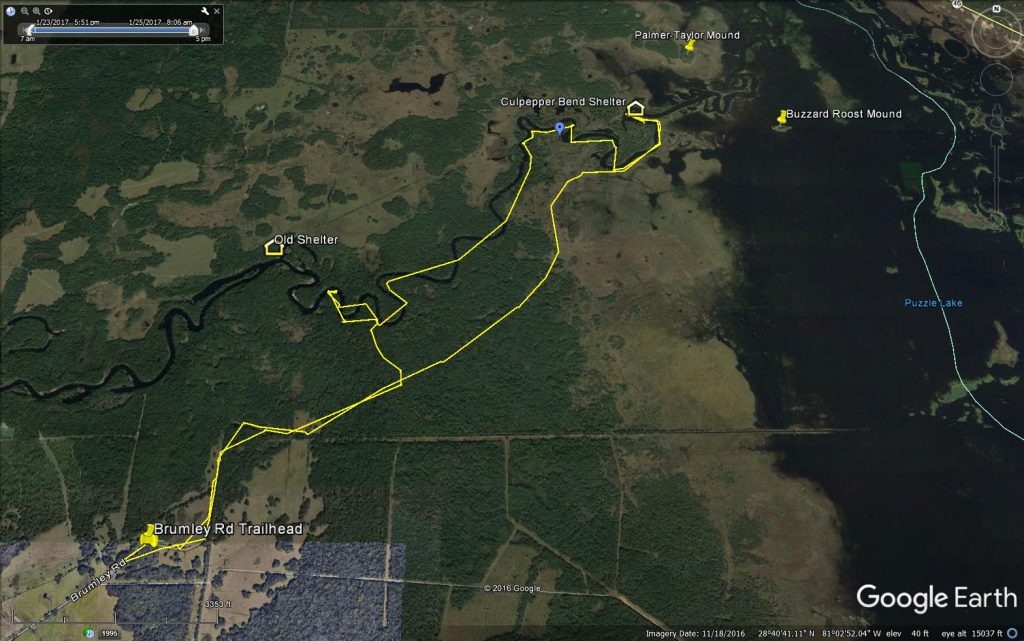 On 01/24/17, I joined a group of seven for a walk in the St. Johns Wilderness for a shad fly fishing trip on the Lower Econlockhatchee River. Philippe Richen, long time member and organizer of the Orlando Kayak Fishing Club, has set up a series of five hikes in to prime shad fishing areas, and I was lucky to join him on the first of these trips. Philippe, John, Tony, Reid, Devon and I met up at the Brumley Trailhead of the Little Big Econ Wildlife Management Area at 8:00am, and decided to make the hour long hike down to the Culpepper Bend area of the river using the yellow trail service road, and then work back upstream. Todd was running a bit late and when he arrived he decided to make his way up to the white trail where we would meet him later in the day. 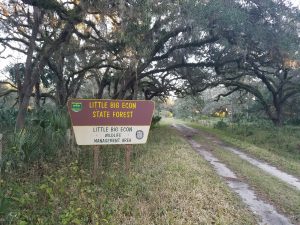 We took the main service road to the turn just upstream of the Culpepper Bend, as it is a straight shot, an easy hike, and when we arrived, then hugged the river to get to the bend. The road was high and dry until we got to the pasture where we found a bit of standing water. I have made the hike to Culpepper before, but last time I used the section of the yellow trail that hugs the river. The service road is quicker, and with a mountain bike, you could be there in a half an hour I would say.

We found decent current at Culpepper and fished the river on both sides of the bend diligently, but did not find shad. The wind had picked up to 10-15mph so we decided to start moving back up river where trees and deep cut banks provide some shelter from the wind. We fished each of the bends with current methodically as we worked upstream with guys catching sunfish, bass, and gar along the way. The great thing about fishing with a group like this is you can quickly and diligently work a stretch of river and you either find fish, or move on.

Todd reported catching a shad up on the white tail, so after a lunch stop, we made our way up to that area of the river using the section of the yellow trail that hugs the water. This is a great hike with gorgeous views of the Econlockhatchee River. There are areas of the trail where it is a little less defined, but just follow the yellow blazes on the trees until you hit the trail marker where the trail splits. Here you have the option to follow white blazes back to the service road, or continue following white along the river where there is good current and prime spawning area. The blazes looked to have been repainted since the last time I made this hike, and were easy to spot. 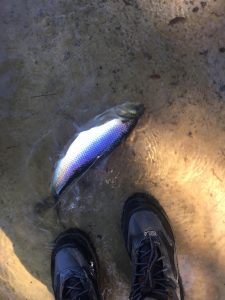 We fished these turns for a bit and I finally managed to get the skunk off of me with this little guy. Impressive huh? 🙂 Soon after, Mark Benson made a surprise visit by boat and gave folks a chance to try casting a switch rod for the first time. While Todd spent the day using his switch upriver of us, my two-hander never made it off of my pack, as I was quite content using single hand Spey casts or overhead casts on the smaller waters of the Econ. Reid hooked up with what seemed to be a large hen which broke off before coming to hand. Mark reported slow fishing as well.

While the shad fishing continues to be slow, this was a great hike and I made some new friends that I hope to fish with again very soon. Special thanks to Philippe for organizing and hosting this event!

There are still four more group hikes planned if you missed this one. Here are the dates and tentative locations:

If you are interested in joining a great group of people for a day of hiking and fishing, join one of the events on the OKFC Facebook Group. Groups are limited to eight people, so sign up early!