This is the fourth of eleven California shad flies in the collection originally found in the booklet How to Catch, Bone and Cook a Shad produced by the California Department of Fish and Game.

An interesting note about the California Shad Fly #4, in both the original version of Shad Fishing and the 2002 re-print, the pattern calls for a red kip tail wing, but the photo plates show the fly without a wing. I happened to find a used version of the booklet that Pfeiffer references and have ordered it to see if the original pattern did indeed call for a red wing. I will update as soon as I receive it.

UPDATE: I received a copy of the booklet and the California Shad Fly #4 is listed without a red wing. Another thing to note, the body is tied fatter, like a football in the picture in the booklet. My version of the California Shad Fly #4 is tied as listed in Pfeiffer’s Shad Fishing, and while it varies from how it was originally tied, I am sure it will still catch shad. 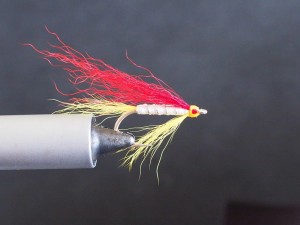