I decided to try something a little different yesterday, and make the paddle downstream from the Snowhill Road bridge, to see if I could find shad in areas that are not fished as often, and are not necessarily considered “prime” shad spawning habitat. I found fish last weekend at the prime spawning grounds found off of the white trail hike from Brumley Road, and figured the huge surge in water (nearly 4 feet in a single day) from rain that pushed discharge close to 700 cfs would get the fish moving upstream. The question was, just how far upstream? I gambled and chose to paddle downstream versus a hike upstream.

I think more than anything, I just wanted to do a little solo exploring and this is a section of river I have not spent any time on. I loaded up the canoe with fishing gear, provisions, and the trolling motor (for the ride back upstream) and hit the river at 10am. The current was fantastic and I quickly made my way downstream with little effort. I arrived at the first turn, parked the canoe and started to work the area with the ultralight, rigged again with a Hardcore Shad Spoon, and 3-4 splitshot. The plan again this weekend was to move quickly, work an area methodically with the spinning rod, and if I found fish, move to the switch rod and further canvas the water, and if not, move on.

I did not find fish in the first few turns, despite the good current and depth. I did run in to a couple of fishermen in a Gheenoe (man I have to buy one of those someday) that had made their way up from CS Lee. They reported catching a couple downstream, but reported slow fishing. They were making their way upstream above the bridge to see if they could find fish. Shortly after, it started to rain, and I contemplated whether I wanted to venture too much further downstream, particularly with the lack of fish in the turns I had already worked, and that report. I decided to suck it up, and just explore, if I found fish great. Even a rainy day on the Econ beats a day at work.

I fished each of the turns, as I made my way downstream, enjoying the scenery, taking my time and studying the current, and did not find fish. After an hour or so, the Gheenoe passed me again. I asked if they had any luck upstream. Nada. I continued my journey until I found a hard turn with a confluence of a small stagnant pool, and a runoff creek. The current was really booking through this natural chokepoint, and I figured if there were shad anywhere, they had to be here. I would work the area thoroughly, and if I did not find fish, attach the trolling motor and head home.

After a half a dozen casts with the shad spoon, I hooked up with this beauty that took line and jumped five or six times. I quickly moved to the switch rod and started swinging a white Soft Hackle Shad Fly (see bottom picture in link.) I caught two more fish with the fly rod and then the action just turned off. I figured this spot was likely just a good choke point to catch fish as they traveled upstream, but they likely were not congregating there. I switched back to the ultralight and worked the pool just downstream of the head and found no takers.

I continued downstream and caught one more fish on the ultralight, and one more on the switch. After making a couple casts in to a nice pool with a good whirlpool eddy with the ultralight, I kept breaking off the spoon and splitshot. It took me three lost rigs before I noticed I had lost one of the ceramic inserts in one of the guides, and that was what kept snapping the line. Looks like I will have to figure out how to replace the guide, or I will be buying a new ultralight, as it has become a trusty part of my system.

In all, I made it about 2 miles, which put me down at the big pool a mile above the power lines, that Luc Desjarlais, mentions in his book Wade Fly Fishing The Upper St. Johns River Basin (Florida) for American Shad. I did swing some flies through the pool, but with the extra water in the river, struggled to reach the “fishy” areas. At about 3:00, I called it quits, attached the trolling motor and made my way upstream. Running wide open around 3 miles per hour with the 55lb thrust motor, I made it back to the bridge in about 40 minutes, had no problems navigating obstacles in the river with the high water, and even with the swift current, my battery still had about 64% in reserve.

I enjoyed the trip, and indeed caught fish, but I am not sure I would recommend a visit. I probably will not return this year, but will indeed consider it in similar runs when the flow on the Econ is higher than that of the St Johns, particularly early in the season. My gut tells me there are a lot of fish in the Econlockhatchee this year, but with the recent rain, they are spread out all over the river. With depth and good current, there is a lot of good water to keep fish happy, and I do not think they are congregating in typical areas in large numbers, at least not yet. As the water levels continue to recede over the next week (or two,) I would think we should start to see them again in the spots accessible from Brumley Road, and likely upstream of Snowhill Road, if they are not already there. I LOVE fishing for shad on the Econ River, and the later it gets in the season, the more technical the fishing becomes. If you want to try out trout tactics with shad, I think this year is shaping up to be one of those years! 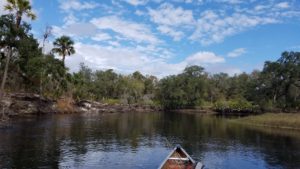 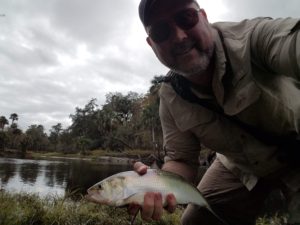 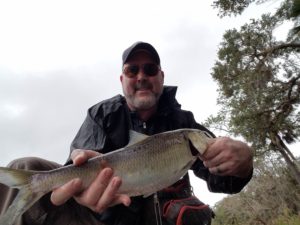 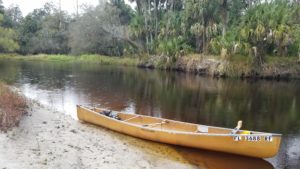 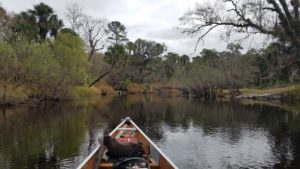 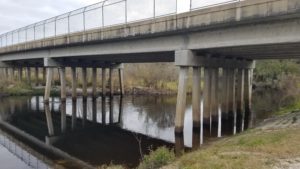