After postponing my trip to the Econlockhatchee River last weekend due to a cold that hit me with a 101.7 fever, and the body aches and general malaise to go along with it, I decided to make the hike out of the Little Big Econ State Forest trailhead on Brumley Road on Saturday. This is a great hike that puts you right on top of some pristine spawning areas for shad, that do not receive a lot of pressure most years, particularly when the water is low. Most boats do not venture this far up the Econ when launching from CS Lee, and while you may see the odd airboat or maybe a few mud boats, it is generally a quiet area to fish.

I hit the trail at about 9am and made a brisk but purposely quiet hike along the service road hoping to spot some wildlife. I was rewarded by seeing a large flock of sandhill cranes, two bald eagles, and a very large group of maybe 30ish deer that leapt across my path not far after making the turn off of the service road on to the single track trail marked by the yellow post, and white blazes. I made it to the white/ yellow trail junction at the river in about 30 minutes, which was quick enough to warm me up enough to shed the jacket, even with temperatures hanging in the low 50’s.

While there were likely fish down the yellow trail, particularly in some of the faster moving water upstream and around Culpepper Bend, I decided to stick to the white trail and fish the pools on each of the bends leading up to the Yarborough shelter. It is an easy hike, but maybe a little more advanced than the yellow trail, as the trail is definitely less traveled and certainly not as clearly defined, and the white blazes can be hard to spot. I have made this hike several times over the last three years, and have just come to accept that I will get turned around at some point, and have to figure out how to get back on the trail. The good news is, in lower water years, the creek and small ponds that usually make navigation a little more challenging are just about dry, so you can fast track from destination to destination without coming to a stagnant dead end that you would rather not wade through. If you are new to the hike, do not fret, just stick to the river and you will be fine, you will end up on the blazed trail soon enough.

One thing to consider about this section of river is, it is not super conducive to single hand fly fishing where false casting is necessary. You will be alright on the first two turns, but further upstream, the banks get high. In lower water years, you can climb down the banks in areas to get to sandy footing below, but that high bank will present some problems to your backcast in a few choice areas that have nice pools with good flow entering and leaving them. This is perfect for Spey casting though, where waterborne casts give you access to river most single hand fishermen will skip. The other option, and one I have recommended on this section of river in the past, is to bring an ultralight conventional setup with you as well. I actually opted to bring both my switch rod and my ultralight rod, and leave the single hand rod at home this trip.

If you have been reading this blog for a while, it should come as no surprise that I am a Spey fanatic, and fishing the Econ with a switch rod is an absolute dream. In this section of river, the water sits down well below the tree line where the wind will not bother you, even on the breeziest of days and in most areas, you will have no problem dropping a fly quite literally on the opposite bank with a well executed Single Spey or Snap T. Using the short, medium, and then long cast method, you can cover a lot of water with just this one tool. However, I decided to use a “run and gun” technique this trip and use the ultralight to accelerate this methodology.

I rigged the ultralight with a Hardcore Shad Spoon and four splitshot about 18 inches above the spoon and started fishing around 10am. I can’t hit the opposite bank with this particular setup, but I don’t need to (I have the switch.) I can however, cover a lot of water faster than swinging flies, which means I could fish areas I would generally skip because of lower flow, slow eddies, or otherwise less attractive water to find fish. If I found fish using the “fish finder,” I would then change to my preferred method, the switch rod. For this trip, I rigged the switch rod with the Rio Scandi Versitip Short head system, paired with the Type 3 tip. Heavy tips and flies are not necessary in this section of river when the water is low, so the Skagit head was not needed, and the Scandi lays out more delicately which is helpful in the shallower water where fish can be spooky. Even though the water is relatively shallow, the Type 3 tip ensured I could get down to the depths of the pools, but not anchor the head in the shallow runs coming in to, or leaving the pools.

This approach was very successful, and I was surprised by where I found and caught fish. The heads and tails of pools are always normal suspects, and of course I found fish there, but interestingly enough, those fish seemed to be hickories or smaller males. In the depths of the pools, where there was hardly enough current for me to bat an eye at, little less spend much time swinging flies through them most years, is where I found big, fat, healthy, hard-hitting females… full of energy, making strong runs, and multiple jumps. The males were feisty and fresh as well, but the hens made the day.

I used this tactic successfully, covering a lot of water quickly, catching a fish or two, and then moving on. While I likely could have sat in one general area most of the day and caught fish, I didn’t want to pound the schools to death. They are here to spawn, and we should respect that. Rather, I chose to explore and try new areas of the river where I have not spent as much time, and was rewarded by landing fish in new places I have never fished, or have fished but not found them in prior years.

By 2:00 I had made it up river to the turn just downstream of the Yarborough shelter. I caught fish in the slow pool just below that, and feeling famished, decided to have lunch on the high, sandy bank. This is my usual spot for a break, but today I kicked it up a notch. Because of the chilly weather, I brought a little alcohol penny stove with me to heat some water and have a hot lunch riverside, courtesy of Mountain House. My plan was to continue upstream after lunch, but a couple of boats that had passed me earlier had obviously set up there and were firing what sounded to be full magazines of .223 at God knows what. I opted to eat my lunch quietly, keeping my head down low, and then make my way back downstream. 🙂

By 4:00 I had caught ten shad on the switch, and at least that many on the ultralight. I decided to call it a day, don some dry socks and make the hike back to the Jeep before the sun got too low. On the way back, I inevitably got turned around trying to make my way down to the white/ yellow junction, and found myself upstream of where I put on dry socks, which added 15 minutes extra to my trip. It happens. I course corrected and made my way out of the forest back to the service road. On the way, I saw a bunch of turkeys very close to where I saw all of the deer earlier in the day. Shortly after, I ran in to some long horn bulls blocking the service road. I mooooooo’d, waved my hands, yelled “GO On Now!” They just looked at me, so I carefully proceeded with no “goring details” to report.

In all it took me about 45-50 minutes to make it back to the trailhead. Slower on the way out, but that is what happens when you have had a successful day of shad fishing on the Econ.

One note of interest, early in the day of fishing, when the sky was blue and the sun was bright, I could not buy a bite on flies with hair wings. I knew there were fish there because I caught them on the ultralight, but they would not take the kip tailed clousers I was throwing. I switched to hackle flies and immediately started catching fish. Later in the day when the clouds moved in the hackle flies stopped working. I tied on a chartreuse and white clouser, and caught fish. Not sure what exactly it was, but having options helped. 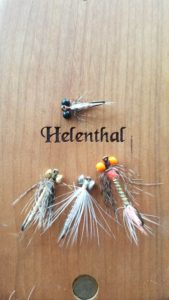 Hackle Flies on the Econ 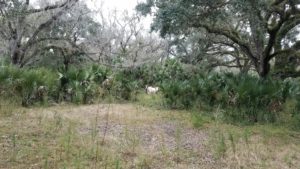 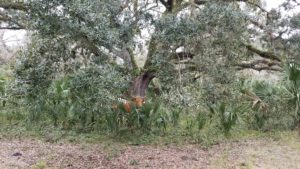 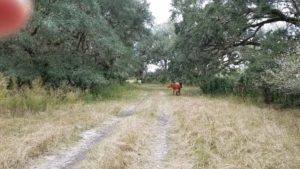 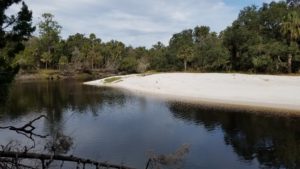 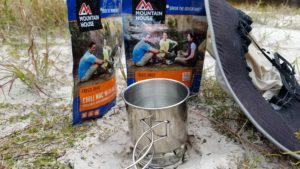 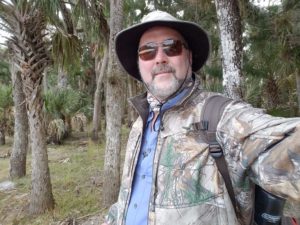 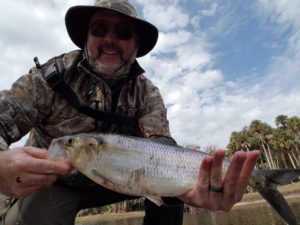 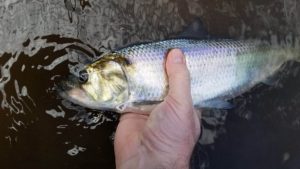 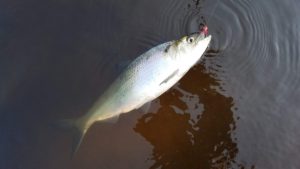 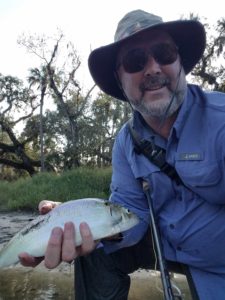 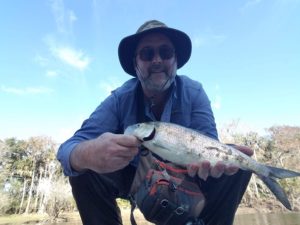 Shad on the Econ 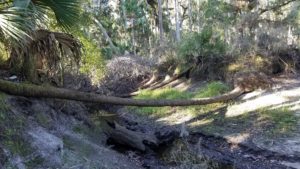 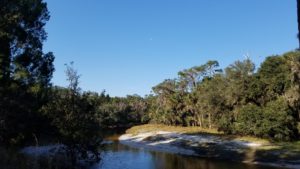 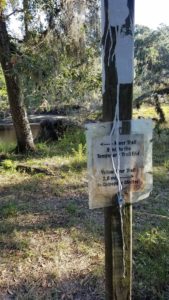 White or Yellow Trail, you choose 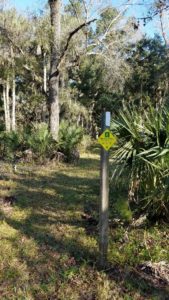 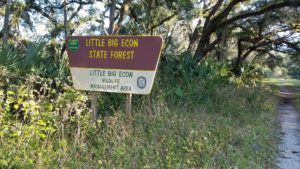 2 thoughts on “Double Digits on the Econlockhatchee River”