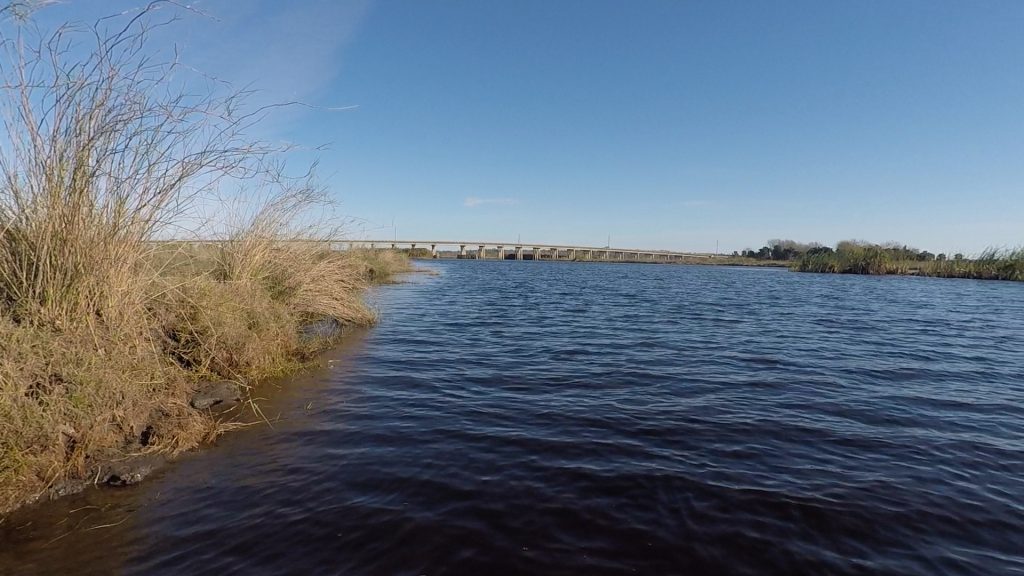 My buddy Todd and I made one final attempt to land a December shad in 2016 and did some New Year’s Eve shad fishing. We launched from C.S. Lee and fished each of the creeks on the way to the mouth of the Econ River. The water is low and the wading is fantastic. That said, beware of deep holes where water converges. I found myself chest high on one occasion when I slipped on the slick mud underwater in to an unseen hole and filled the boots on my chest waders.

The water discharge was minimal in the morning and we found it difficult to even swing a fly with T3 tips on the switch rods. I switched to an intermediate tip and then eventually a floating tip to even get some semblance of a swing downstream. I am pretty sure it is time to put the sink tips and maybe even the hourglass eye flies away for good this run. Quartering downstream and animated retrieves will likely be the tactic for this run.

We fished the creeks for an hour or two without any luck and made our way upstream to the Econ. The wind did finally pick up from the south southwest which pushed the water downstream and we were able to swing some flies there. We fished both the east and west banks for multiple hours without a bite. Fish were breaking surface near the mouth of the Econ, but I suspect they were bass or crappie. I never saw the tell tale silver of shad washing. The fishing was painfully slow and I even tried throwing a gurgler to try and grab a bass at one point. No luck.

Cold beer kept us happy as we made our way downstream to work several areas of the river we skipped on the way up. We found good current and crackle bottom which are both ideal, but no shad. We both finally got the skunk off of us late in the day with Todd landing a nice keeper crappie and me landing a largemouth that put a serious bend in the 6 weight switch rod while it performed acrobatics.

The reports have started to trickle in of shad being caught upstream of SR 46. However, it still seems pretty sporadic and I will likely skip a week before heading out again. Happy New Year and may 2017 be filled with shad on the fly!

Something of note, in addition to the lack of current in lieu of a south wind, I noticed the river was muddier than usual, and seeing your fly even four to six inches under the water was difficult even with polarized glasses. As you can see in the picture above, the cut banks we have missed for the last couple of high water years are starting to expose themselves and as boats fly by, the mud of course travels downstream. This will likely subside some as the pasture dries out and firms up, but you may want to keep it in consideration when choosing flies in the early part of the season. While I am generally not a chartreuse guy, I do remember having success with them in low water years versus high water years. I will be tying some up, and will likely jump from a size 6 to a size 4 for the early part of the season, but at the end of the day, who knows? 🙂