Yes, believe it or not, there are still people fishing for shad in Florida in mid-march, and there are still shad to be had. I will admit it though, its harder to get motivated as the temperatures warm and the water levels drop. After much deliberation between whether to return to Tosohatchee by boat, or to hike upstream from Snowhill with hopes of sight fishing for shad, thinking that we likely had a similar shot at catching fish at either spot, the weather forecast (highs in the mid 80’s) helped make my decision last Saturday. Ray and I decided to give Snowhill a go.

I picked up Ray at 8am and we made the quick trip to the bridge. From there we set out upstream by foot and scouted several shallow sections of river where we had either seen or caught shad in previous years. With the the gage at close to 2.0 feet, the water level was perfect, albeit a bit stained, and while the lower section of river was full of fry, we did not see cruising shad. We did see good numbers of bass and panfish though, which was a stark improvement since Ray and Todd had run in to each other on this section of river a couple of weeks prior.

As the foot traffic increased, we decided to book it to the Double Gator Pool, a popular picnic spot, to stake our claim. There we found one nice sized alligator, around 8 feet long parked half on the beach, with its head in the water. I mentioned to Ray that it had been a while since I had actually seen two alligators in this spot, and wondered whether the big alligator had been culled. We both quickly got to work with the ultralights, covering the water from two perspectives, and two different setups. This spot offers limited space for a backcast, and while I did have my short 6 foot fiberglass 5 weight rod with me for some single Spey action, the ultralight is more efficiently used as a fish finder. Ray quickly hooked up with a nice sized red breast. Soon after Ray landed the fish, I hooked up and said we must have found the school, right as the fish jumped. To my surprise it was a nice, fresh, fat, unblemished shad caught in the depth of the pool just outside of the current.

Five or six casts after, Ray hooked up with and jumped a nice shad, only to lose it as he reached down to grab it. We continued covering the pool, Ray on the ultralight and me making single hand Spey casts. Ray was rewarded with another nice catch on an orange grub, the bottom lure on his tandem setup. Again, this fish was a nice fresh fish, unblemished and thick.

In years past at Snowhill in March, most of the time if we found fish, they were generally at the tail end of the spawn, even to the point of emaciation, but that did not seem to be the case this day. I suspect because the Econ was low most of the early part of the season compared to the St. Johns, we did not see an early rush of fish head up river. In mid February, we got some serious rain in central Florida, and saw a very nice bump in river level and flow. As the St. Johns leveled out, this freshet was likely a beacon to later run fish, and some of them diverted up the Econ later than usual, hence the clean breeders in the river this late. Add to that, a late cold snap, and cooler evenings even in to mid March, and you have comfortable water for shad to continue doing their thing. That said, who the heck really knows, I am just documenting, so I can later scrutinize, overanalyze, and study water levels while preparing for a future season. 🙂

Of significant note, even prior to the Econ’s water level bump, Zain Khalid (FB Group member) caught a very nice shad under the Snowhill bridge on February 13th, nearly a MONTH before I would generally bother checking this section of river. So water levels, shwater levels, there are fish moving up regardless, and not just the hickories we know come up every year, but likely Americans as well. Note to self, there is still ALOT to learn, check early and check often, its close enough to the house.

It was clear that there were fish in the Double Gator Pool, but Ray and I were both on the board, so there was no reason to beat up the pool. Now that we knew there were fresh shad still in this section of river, we figured we would find them in other spots too. Its much more interesting to catch fish in different places and in different ways, than just pounding pools. While Double Gator is always a likely suspect, sight fishing it is not.

We decided to venture upstream to the Willow Pool, but hopped down to some clear water past the tail of the pool and found a small pod of fish that I have now decided to call bouncing shad, maybe 6-12 fish. I say bouncing, because these were not cruising fish, headed up or downstream where you may get to take one or two shots (at best) and then they were gone, and not holding fish, that set up stationary somewhere in a bigger school where they are comfortable waiting to spawn and you can take multiple shots at them as long as you don’t spook the school. Rather, these fish were in super shallow, clear water, well aware of our presence, moving between one small trough in a sandbar, to the next, then down to a shallow divot, then up under a log, to the outside cut, and back again in the same general area of river just 30-50 feet long. THIS is sight fishing, and frankly, it can be every bit as challenging and frustrating as targeting small pods of bonefish on a shallow flat, just in miniature. I made about a dozen decent presentations with long leaders/ tippets and small Partridge and Peacocks and could not get them to eat. I did manage to pick up a small bass and red belly though. Of note, the head of the Willow Pool is not what it used to be. While the outside trough is still there, the current was not as swift, and the bottom was dark. Downed trees have likely changed the bottom structure and the current, clear water, and sand bottom are now at the tail of the pool.

We continued upstream to check out the second turn below the footbridge, and along the way I spotted two very nice sized bass holding so we jumped down to the river. Ray took some shots at the bass and about the same time, I saw another group of 15-20 shad. These fish seemed to be cruising, and while I took a few shots, I did not have any takers. As we worked upstream we found another group about the same size, and just as unwilling to eat. We did arrive at the second turn, only to find a lot of downed trees, making the bend that Luc Desjarlais considered one of the best on this section of river in his book, essentially unfishable. Similar to the Willow Pool, the tail of the pool has nice current and clear sand bottom which would normally be worth checking out, but there was a couple having a picnic on the outside bank and we decided to give them room.

We made it to the footbridge, had a quick lunch and began fishing, only to be interrupted by a group of noob paddlers that put in at 419. The racket, the complaining, the need for a break… completely miserable with being outdoors, all landed essentially at our feet, as one of the canoes tipped while trying to land on the sandy beach where we were fishing. Uuuuuhhgh, Ray and I never even looked at each other, but both in just about unison wound the reels, packed it up, gave a few words of encouragement to the paddlers and set out down steam.

We returned to the Double Gator pool to take some final shots and this time found the big boy parked high and dry up on the beach. Ray took a high perch up on the bluff and could clearly see shad coming to the surface just outside of my swing. With both gators clearly visible and Ray spotting, I got brave and waded in to get to a small spit of submerged sand where I could take some shots in to the strike zone. I made a few good presentations before a couple of hikers arrived just down stream of us, and the gal decided to randomly cannonball in to the river for a dip… Uuuuuhhgh. This spooked the female gator directly across from me, and she slipped in to the water and quickly made a direct beeline at me. I twinkle-toed my fat butt out of the water, back on to dry land, and called it a day.

We found shad at Snowhill, and even got to take some pretty solid shots sight fishing for them. SIGHT FISHING… for shad! I mean come on, even to just have the opportunity to do that is so frickin’ cool! We both caught shad, and multiple other species, while many others hung it up weeks ago. In all, that is a pretty solid day in my book! 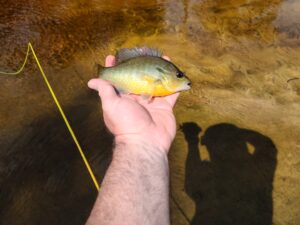 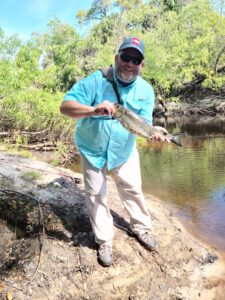 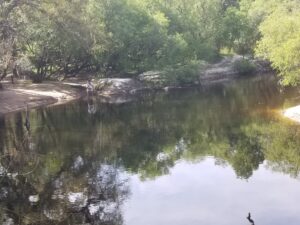 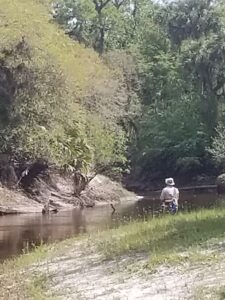 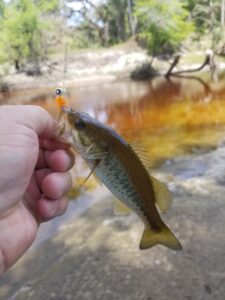 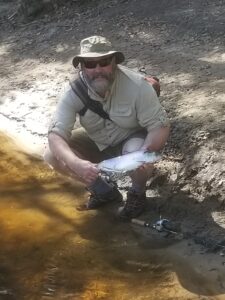 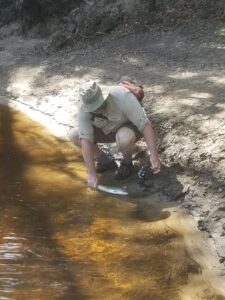 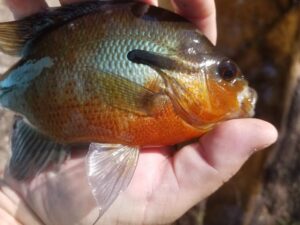