It seems like the middle of March just snuck up on me. As the temperatures have warmed rapidly and the chance of rain dropped in to the single digits, the reality starts to set in that yet another shad run is coming to an end.

Early in the season, it looked like we would have an amazing run for spots like CS Lee, Hatbill, and beyond, with reports of fish being caught in Shad Alley in early December and nice sized fish already being caught at CS Lee late in December. Heck I even caught a couple before Christmas, which is a rarity, as in recent years I generally force myself to wait until after Christmas before wetting a line. However, like many I struggled to locate fish in the typical spots upstream of Lake Harney. This all but forced me to change focus, and make this a season of exploration and study.

So what made this shad run a struggle when everything seemed to be lining up so perfectly, so early? As I mentioned in a prior post, I think a lot of this just had to do with water levels and timing. While it felt like conditions were coming together perfectly, upon closer inspection, we actually had lower water this summer coming in to fall. Less water during summer and fall meant less time for minnows and grass shrimp to build up on the flooded pastures, and what bait was there, was swept off in to the channel early as the water receded within its banks for the first time during this season which was in late November/ early December. I generally consider the window of time between 3.0ft- 2.5ft on the USGS 02234000 gauge to be what Mark Benson refers to as the “squeegee,” that brings all that bait in to the main channel near CS Lee, and will become the target I more specifically track in future years.

After the early squeegee, we then got a pretty decent amount of rain in late December through early January that bumped water flow up considerably and likely pushed what little food may not have already been consumed, back outside of the banks. This set of conditions is likely what caused the typical December wave of fish to just continue upstream rather than congregate and feed in this section of river. As mentioned in an earlier post, good numbers of fish were being caught well upstream of SR 50 (and beyond) in November and December. Of course while that may have been the case, the conditions were not quite favorable for fishing for them outside of the boat, something that is an important consideration for those of us fishing by canoe or kayak. While I am still getting comfortable with the area of river south of SR 50, somewhere between 5.0ft- 4.5ft on the USGS 02232500 gauge is when I will consider making my way out there to do some bank fishing.

As others began to hang it up and call it an early season, I decided to slow down and focus less on writing and more on exploring new sections of the river. While I did plenty of fishing, I made a conscious effort to be more observant of flow in different areas, and note details like confluences, structure (both onshore and in-water,) and water features like seams, lines, and eddies. To help expand my confidence in my new boat, and also my range and knowledge of different areas shad may congregate year to year in different conditions, on two back to back Saturdays, I decided to drop the canoe in at the Power Lines at Tosohatchee and motor downstream towards 7 Palms and beyond. This is something I had considered doing by kayak in prior years, but the large alligator population and stiff current eventually swayed me from doing it.

The first outing was on February 22 with Todd. We made our way downstream of 7 Palms to a pool where we found good current and fish active on the surface. Here we found floating lines and light flies to be more successful than the usual sink tips and weighted flies we typically catch fish with downstream. We both caught several fish from the first pool, and then decided to motor back upstream to 7 Palms where we would spend the majority of the rest of the day, before fishing each interesting turn while heading back to the launch. Unfortunately plans changed when mysteriously, Todd broke the tip on his switch rod in a freak accident as we loaded up.

While we did stop at 7 Palms and fished with my switch and spinning rod, we quickly decided to motor back to the launch to grab Todd’s spare single hand rod from his car and then try upstream of the launch. Unfortunately we found the water upstream to already be too shallow to motor, even in the shallow draft canoe, and being that Todd had to be off the water at 3:00, decided not to park and hike or portage the boat upstream to the deeper pool we had hoped to hit. We did fish the turns closest to the launch, which are also accessible by foot but we did not find shad there. While we had some issues, overall this trip was a success, where fishing a new area of the river gave me the confidence to come back again, and explore further.

Fast forward to February 29 and Ray and I launched the canoe from Power Lines in to a stiff 20-25 mph NW wind, meaning we would be running downstream through some pretty good white caps. Thankfully while I was outfitting my canoe, John Hawko had warned me about his experience almost sinking a motored canoe while running in similar conditions, so I decided to stop by the time we got to 7 Palms to see how much water we had taken on while underway. It was a good 5-6 inches in about 20 minutes of motoring.

We bailed out the water and set off downstream to the pool Todd and I had fished the week prior. Again, we found fish active up top, and I fished a Fry Fly while Ray threw a small EP Minnow. We both caught several fish including Ray’s first fish (not just shad) on the switch rod!

Rather than beat up the pool we decided to keep on moving and exploring. After a short run, we found another nice pool where we both caught several more fish and where I believe both of us hit double digits for the day. There were so many fish stacked up on a seam leading in to the pool, that Ray was quite literally high sticking them almost as if he was euro-nymphing out west.

The highlight of the afternoon for me was trying to move the canoe solo back upstream (so we didn’t have to walk so far to get beers of course,) and because the bow of the canoe was up in the air two feet due to my rear-heavy ballast (i.e. @ss,) the wind blew me all over the pool… eventually having to pull the motor, grab the paddle (all the while cracking up,) and paddle while kneeling mid stern. As we made our way back upstream to the launch, we saw fish active up top on nearly every turn, and even the straight away between Catfish Hotel and the Power Lines. It was a fun day on the water for sure, and yet another successful trip!

I finished the season with a walk upstream from Snowhill last Saturday with my wife and two daughters. While I did bring rods, the primary goal was a diversion from the coronavirus-forced change in spring break plans we had. While a river hike may not be quite the same as a week stay at Disney’s Fort Wilderness, my girls really enjoyed fishing with their Olaf rod, playing in the creek, and digging in the mud. I enjoyed seeing dozens of cruising shad, large bass, groups of small bass, mudfish, tilapia, armored cats, and CLOUDS of tens of thousands of shad fry making their way downstream. I could not capture a picture of the fry because of the glare, but thankfully Ray and his family visited shortly after, and his daughter Gabby Lopez got this AMAZING picture!!!

I took some shots at cruising shad but did not connect. I did however catch panfish, catfish, and even chain pickerel. I am not sure I have ever seen that many fish/ species on a single day on this section of river.

As next season approaches, I will try to be mindful about posting more regularly. That said, I will likely still focus more on fishing and posting short format posts in the Facebook Group the weekend of a trip, particularly as the group continues to grow, and give myself 3-5 days to post the detailed long format stories here. Until next year… 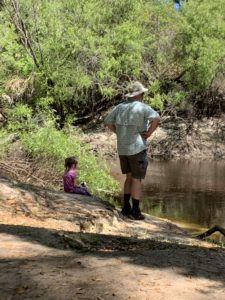 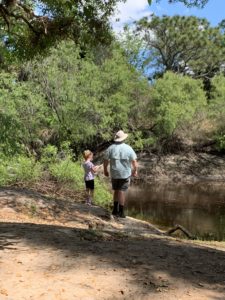 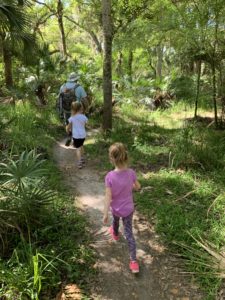 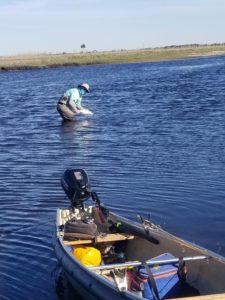 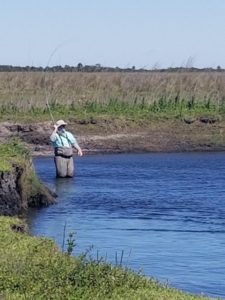 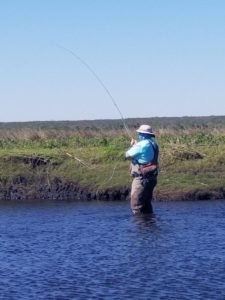 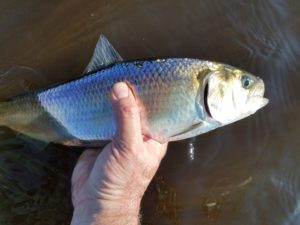 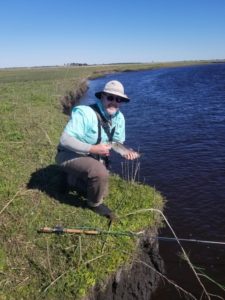 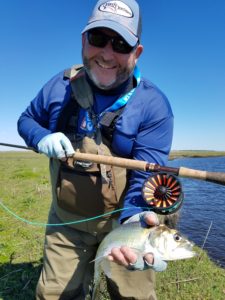 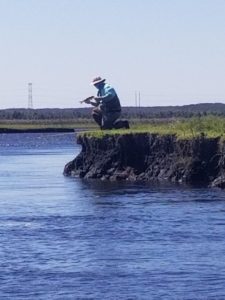 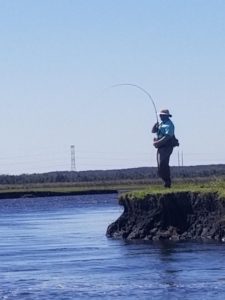 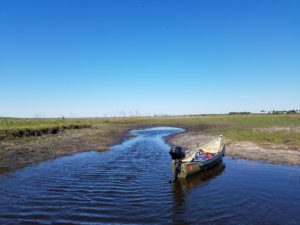 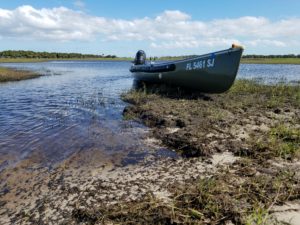 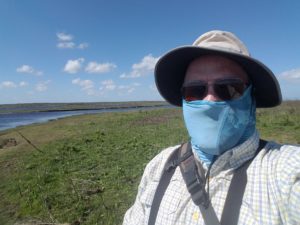 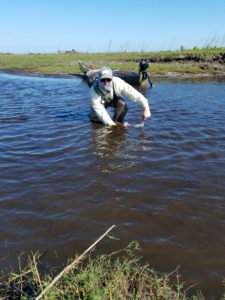 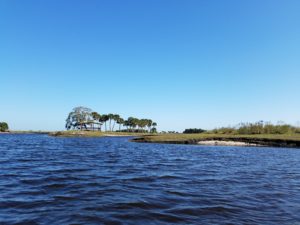