I have spent the last two Mondays on the water at CS Lee and can say without a doubt, there is plenty of water and current… now we just need the fish to show up! Last Monday Todd and I hit the water with high hopes of catching fish. After catching three shad on a half day outing the week prior and with a nice 5 inch bump in water since our last visit, we figured we had a decent chance. Unfortunately we were wrong.

The bump in water brought the gauge height above 2.5 feet, bringing the water up just enough to distribute the mosquitofish back in to the grassy pasture, and out of the river’s feeding frenzy. Paired with a looming front moving through, this meant we swung a lot of flies for a few bi-catch, and no shad. We worked all of the normal suspects, creek mouths, east and west bank at the Econ, using T3 and then T8 Tips to cover the water column and found no joy.

Fast forward a week to this past Monday, and we found the water had moved up yet another foot with all of the recent rain, spreading the minnows out even further, and making it a real chore to wade. While the water and weather are still relatively warm and waders are not particularly necessary, spots like the creek mouths required knee to thigh high wading. Bringing the waders would have probably been more comfortable and I may have ventured deeper than I was willing to without them. That said, we worked the area thoroughly with the switch rods using T8 tips and 5/32 flies and were not bumping bottom with the +1000cfs discharge and a decent south-southeast wind. I tied on a T11 to go dredging, and while I felt bottom, never anchored nor felt I was pulling up mussels every cast. I also did not find shad.

We moved up to the east bank of the St. Johns River near the mouth of the Econ where I promptly broke my ultralight 7 foot Fenwick Eagle while landing the canoe in the brush… real smooth! I actually have a second one at home so not too big of a deal, but if I break that one, I am going to have to find something different as that would make three in two years. While I like the rod’s 7 foot length for extra reach, I am beginning to think the tips are just too dang delicate for kayak/ canoe/ backpacking life.

The water here also required knee to thigh high wading and again waders would have been nice, but that said, they would not have helped me much when I fell off the east bank and went chest deep… a real possibility any time one decides to take on the challenge of wading the east bank when the gauge is 3.5 feet and the water well outside the banks. SMH… the things I do for this fish. 🙂

Again we worked the area very thoroughly, and just as we were about to move, Todd was the first to hook up with a nice shad, although it was quick released before I could get a picture. I continued dredging for another 20 minutes or so, picking up a couple of decent crappie before finally landing my first and only shad of the day. We continued fishing up and down the east bank, and found no other takers. After lunch and a beer, we moved over to the west bank where the water was ankle to knee high and the wind was at our back, allowing for truly beautiful hero casts, but even as we covered tons of water, we again found no takers and called it a day around 2:00

The fish are around, but MAN… do you have to work for them. The recent rain will be good for the run in general, hopefully allowing the fish to move further upstream, and extending our season. However, they are not moving through or congregating around CS Lee in great numbers yet. I will likely wait for the river to recede within its banks and drive the minnows back in to the river (I estimate somewhere around 2.6-2.8 on the gauge depending on the wind) before returning, unless we get a run of cold weather that drops the water temps and maybe gets the fish moving. Timing getting out there for round two of the feeding frenzy may prove tough though, as my Christmas vacation is quickly fading.

Fortunately I have some work to do on the new (to me) square stern Indian River Canoe I bought from a friend to get it setup the way I want for motoring either tandem or solo to keep me busy. Also, I have purchased my first gas motor, a modest 2.5hp 4 stroke Suzuki which I will need to do an initial break in on before taking it out on the river. I am excited to see what the expanded range this little motor will bring to my fishing adventures will be over the next season or two. Between these two projects, I may be able to resist the siren’s call for a couple of weeks. 🙂 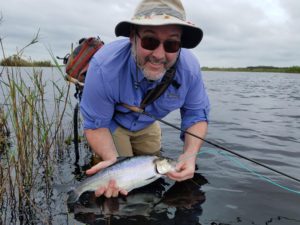 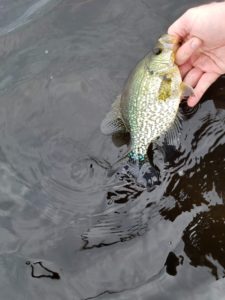 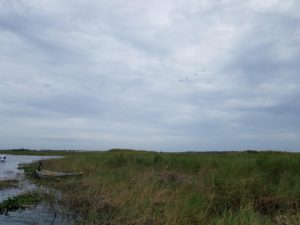 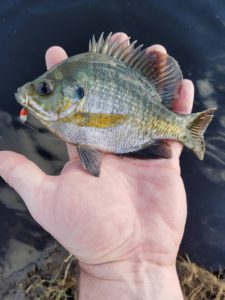 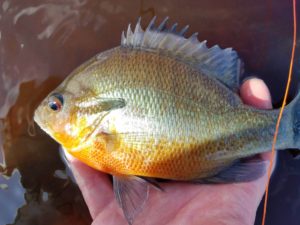 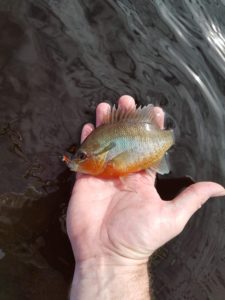