I probably should have heeded the old saying, when the wind blows from the north, don’t venture forth, as I got skunked at Hatbill yesterday. However, the high pressure made far too pretty of a day for me to stop myself, and I was on the water by about 9:30. I made my way up to the second junction, by way through Baxter Point this time.

This decision put me in a very narrow and shallow (maybe 15 feet wide and 6 inches deep) side channel as I weaved my way downstream. The side channel was so narrow, I would soon come to regret my choice of paths when I hugged the inside of a turn, only to find an alligator sunning itself in the shallows of the south bank as I came around a bend. With a 20-25mph North/ Northwest wind, and no brakes on the Hobie, before I could even start to back paddle, I HIT said alligator with the bow of my kayak! Thankfully I scared it more than it scared me, and it quite literally ran on water (just 6 inches deep) until it reached deeper water and slipped under. Ummmmm… yea, clean undies anyone!?

I arrived at the convergence of the East (or is it North?) and West (or is it South?) channels only to find the current completely backed up on the west channel. There was a fair amount of surface activity just upstream on the west channel, but I could not determine if it was just bass or panfish. With the north wind pushing the current upstream swinging flies was a futile effort, but I stripped kip tailed clousers and fry flies through the activity and found no takers.

I moved over to the north bank on the east channel and with the wind at my back was able to make cannon like casts with the switch rod. The narrow east channel is much faster anyway, and even with the stiff wind, there was plenty of current to swing flies. I worked the area very thoroughly, 10-15 steps at a time, making a short, medium, and long distance cast each time before moving, making one full pass with a bead chain fly and then decided to head back upstream to do it again with a 5/32 hourglass fly to make sure I thoroughly covered the water column.

As I got back upstream to start the next pass, a head of cattle started running my way. Noticing I was basically standing on a cattle trail, I started yelling mooooo! and waiving my hands like an idiot to persuade them to find another path. As they approached, the cows stopped, but one of the bulls in the group did not! Now he was not in a full heads down charge like you see at a bullfight or anything, but he had that confident swagger that said to me I am a handsome boy, these are my girls, and YOU had better get out of my way! With seconds to make a decision, a narrow stream behind me, and a river (I had already had an alligator incident in) in front of me, I actually drew my gun! Thankfully as I disengaged the safety and brought the pistol up to get a sight picture, the bull stopped in its tracks, I kid you not… right about where you see the point near where I am standing on said cattle path in the picture. I’ll take a second order of clean undies for the day, and the check please!

The bull turned around and joined the group, and there they sat and stared at me as I worked my way downstream, fishing the heavier fly. When I reached my kayak, I saddled up and made my way upstream, finally yielding the spot back to the cattle. I fished the area just upstream where there is good current and depth and did not get a bite.

At around 2:00, I decided I had enough and started to make my way upstream. I opted NOT to take the same path back, and instead head towards the first junction. I fished it for maybe thirty minutes, before I had enough of the wind and the lockjaw. As I paddled back to the launch, and made my way through what I will forever call the gators-in-the-mist pool, I counted eight heads, still hanging there even in the afternoon.

I have to say, it has been an adventurous year out of Hatbill Park, and I think I am done with it… for this year! 🙂 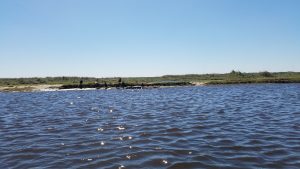 Big gator, thankfully not the one I hit 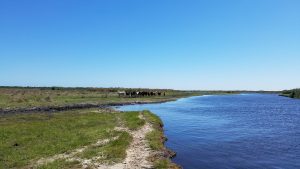 The bull is in there somewhere 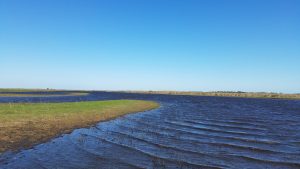 Current stacked up in the west channel 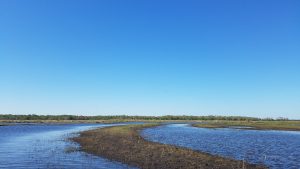 Looking downstream on the west channel 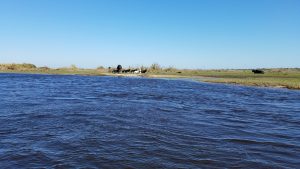 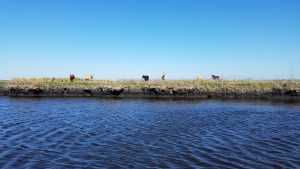