It starts the same every year. As soon as we get the first hint of cooler weather, I start to get the itch. Usually by late October I am already starting to tie shad flies, and before I know it the anticipation gets the best of me and I am out on the water in pursuit of the elusive November shad. This year was no different, and last Saturday I made my way to Mullet Lake Park to fish the S Bend just upstream of the launch. The water is still relatively high so I was wading waist deep when out of nowhere a manatee surfaced about 6 feet away from me. Of course I did not realize it was a manatee at first, and thought it was a giant gator coming to eat the only nut crazy enough to be wading. You should have seen how fast all 6 foot four inch, 235lbs of this shad fanatic walked on water to get away from it! LOL!

Anyway, I only spent about another hour fishing before calling a “failure-to-launch” and made my way down river to take a look at the first prime spot downstream of Mullet Lake. It was a good scouting session, but the motor boat traffic in this area is thick, and they don’t slow down for the lowly trolling motor powered canoe. After getting swamped and taking on some water from a bass boat running at blitz speed, I decided it was not worth the risk and made my way back to Mullet Lake Park. Note to self, take the kayak (or build some outriggers for the canoe) if you want to fish this area, and only make the effort if the water is below average.

Luckily for me, my buddy Todd is equally obsessed with shad and we decided to launch from CS Lee today to fish the mouth of the Econ. Todd is learning how to Spey cast, so more than anything, we really just wanted to get on the water and practice, but the hope was that we would run in to plenty of bycatch, and perhaps the elusive November Shad. The St Johns river was at 4.9ft upstream of Lake Harney today, which means you can wet wade from about shin to thigh high at the mouth of the Econ. The fishing was slow, but with winds blowing from East/ Southeast, conditions were right to force us to use off hand casts, and we both quickly improved our Double Spey and Snap T off the weak shoulder. While we did not hook up with shad, all was not lost as we both caught fish. I got a decent bass and a nice crappie, and Todd got the fish of the day… a large Tilapia, on the swing… which is AWESOME!

We are on track to have water levels right where they need to be by Christmas, and while I can’t wait to get back on the water, I am going to hang it up until water levels recede at least another foot. The hunt for the elusive November shad is over… this year! 🙂 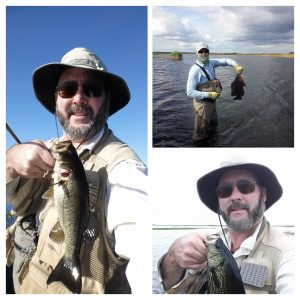