So, what exactly is a Shad? 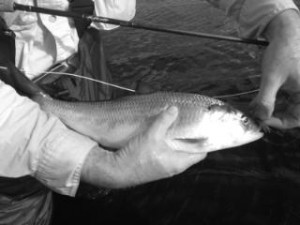 This is the first of six articles included in the series entitled Fly Fishing for Shad- The Basics. If you have made it to this site, you most likely already have a pretty good idea of what a shad is. I am not a biologist nor do I claim to be an expert in ichthyology, I am simply a fisherman that loves fly fishing for shad. There is a wealth of scientific information readily available about the shad, so I will not dig in too deep here, but will provide some links below if you would like to get more information. What we are going to do here, is just get a basic understanding of this fish that will help us target them with a fly.

First off, when someone says “shad,” some people tend to think about the gizzard shad, threadfin shad, blueback or other small members of the herring family. But what we are really talking about are the shad that strike hard, run fast, and leap out of the water when hooked with a fly. The two fish that we are really talking about are the American Shad and the Hickory Shad.

Both the American and Hickory Shad are found from Newfoundland to Florida and are anadromous fish, meaning they spend most of their lives in saltwater but spawn in freshwater. Here in Florida, this is really the closet thing we have to a traditional salmon run that northerners love. It gives us an opportunity to do some “traditional fly fishing,” in other words, swinging streamers in a freshwater river rather than stalking saltwater fish or targeting bass or panfish with poppers.

The shad run in Florida starts as early as the end of November/ early December and can last through April. Generally there is a 4-6 week period of “peak” fishing somewhere in between, usually in February or March, but it depends on water conditions and temperature. The fish begin their trip up the St. Johns river from the ocean when the water temperature begins to cool down in the winter. The temperature of the water seems to be in debate depending on your source but the mid 60 degree mark seems fairly consistent. The mass of fish make their way upstream (south as the St. Johns flows north) towards the area near Puzzle Lake to spawn. Popular launches in this area include Mullet Lake, Lemon Bluff, Cameron Wight, C.S. Lee, and Hatbill. More recently, fish are being caught further and further south with fisherman recording catches south of state roads 520 and 528. Lone Cabbage fish camp is a decent place to launch to reach those southern fish.

When shad are migrating, they tend to travel in “pods” of fish, generally traveling in a single-file line or two (or more) and they tend to hug the bottom of the river for safety. The fish in these pods can number in the hundreds and that explains why you sometimes see dozens of people hook up with a fish almost simultaneously. The action can last quite some time, with anglers catching a shad nearly every cast. The action can then be followed by lulls of sometimes hours where no one is catching anything. It is not rare to hear of 100 fish days, although I have only managed around 40 in a single day myself.

From time to time you will see fish erupt in a flurry on the surface of the water in what is known as “washing.” This is spawning activity and it is amazing to see enmasse. When shad are washing, you will generally not catch them. However, occasionally you may find that they will key in on floating flies versus sinking flies and can indeed be caught.

There seems to be some discussion as to whether some of the shad that travel up the St. Johns river are repeat spawners. Traditionally, information says that shad that spawn in any river south of Cape Hatteras, NC spawn and then die. However, recently there has been some discussion as to the viability of that theory based on a hypothesis that there is not a biological need for the spawning fish to die and provide the necessary nutrients back in to the river in order for the fry to survive. The thought is that the St. Johns river is a nutrient rich all year long, unlike clear water rivers of the north. Some evidence that the hypothesis might be correct is the lack of large numbers of dead shad in the St. Johns after the spawn each year. The counter argument is that the shad run in a staggered nature, not all at once, and tend to live in the river for up to two months and then die off gradually.

In addition to the discussion regarding repeat spawning, there seems to also be some discussion as to whether shad eat while in freshwater. Traditional information seems to lean towards no, they do not eat. However, more recent information seem to lean more towards, yes, they do eat… sometimes. Samples of stomach contents provide evidence of creatures found in the St. Johns. However, whether those contents got there because the fish was actively feeding, or simply got in a shad’s way and aggravated a strike seems up for debate. What we do know for sure is although they generally eat plankton, shad do eat small shrimp and occasionally small fish in the ocean, so fly patterns tend to emulate small shrimp or fish in size and shape.

Shad were once a prominent food source and were valued for their white flaky flesh and even more so food the females’ roe sacks. However, you will generally not find them on a menu here in Florida as they have not been available commercially since pound and gill nets were banned in the 1990’s. While I generally catch and release fish exclusively, I have on occasion kept them. I try to limit this to just 2-4 fish per year. I am still experimenting with finding a preparation technique that produces more than a lukewarm response from my wife. While the meat itself is quite mild and tasty, they are remarkably boney fish and fileting them properly seems to be an advanced skill. I have slow cooked them for 8 hours at 170 degrees, which I read essentially melts the pin bones, but did not find that to be true. I have fried the roe sacks in bacon grease (the traditional recipe,) served them with eggs and toast and found them to be mild and not too fishy. However, getting over the visual presentation can sometimes be hard for even the bravest of foodies.

Read the Next Article in the series entitled Fly Fishing for Shad- The Basics.